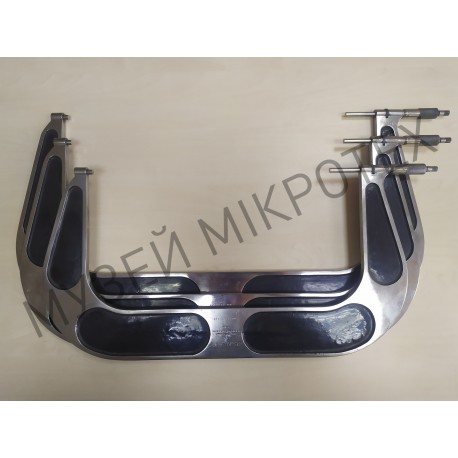 In the MICROTECH Museum of Industrial Instruments, three rare 116-year-old micrometers occupy a central place in terms of historical value for metrologists, as these three micrometers have serial catalog numbers (77, 79 and 80), three factory numbers (…… ..), ie in Kharkiv The "instrument museums" store the first pioneer micrometers.

The American company "B&S" was founded in 1833, the first in the world (since 1868) began mass production of micrometers such as Palmer.

Holds most US patents (which are the most weighty and priority for most types of meter in the world) for the latest meter;

During the Second World War, B&S employed more than 11,000 workers, which is twice as many as today at the largest company, Mitutoyo (Japan);

In the 21st century, the influence of B&S in the world of measuring instruments has diminished somewhat, but even now the American company is one of the three world giants in the development and production of hand-held meters.

Flat two-level brackets, the lower level of which is painted black (this does not solve the problem of thermal protection of the micrometer from the heat of the hands, but significantly reduces heat transfer, in contrast to the smooth metal brackets of analog micrometers);

The drum and ratchet have a modern design and functional indicators, which indicates a high technical level of rare micrometers;

Rare micrometer brackets do not have heat shields, which affects thermal expansion and distorts the results.