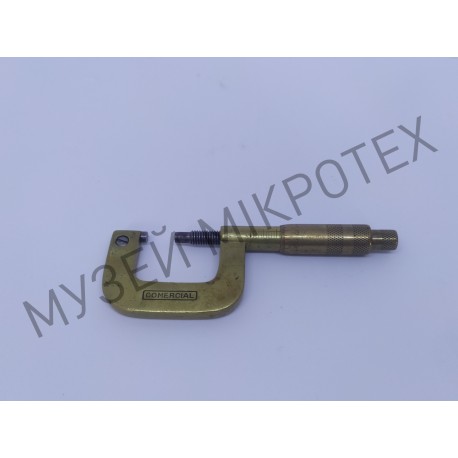 The world's first micrometers are associated with the name of their inventor, Palmer, and are distinguished by a rectangular brass bracket.

The world's first micrometers are associated with the name of their inventor, Palmer, and are distinguished by a rectangular brass bracket.

In the exposition of the Museum of Industrial Instruments MICROTECH the place of honor is occupied by the sample of the micrometer MK-25 "Comercial" of the Palmer type, which has rare features:

The bracket and drum of the Palmer micrometer are made of brass, which is well processed, but the use of brass significantly increases the temperature error (TKLR brass by 50% more than TKLR steel, from which all modern micrometers are made);

The rectangular shape of the micrometer bracket, the usual thread, the absence of a rat distinguishes Micrometer-type micrometers from modern ones;

The rare micrometer uses a conventional M6 screw with a normal pitch (instead of a microscrew with a small pitch), reduced steel measuring surfaces with a diameter of 4 mm (compared to 6.5 mm for modern micrometers and 8 mm in "German" micrometer models);

The micrometer does not have heat shields on the bracket, which appeared in the micrometers much later;

The rare "Comercial" micrometer could be mistakenly attributed to the earlier Palmer period (1885… 1900), but our micrometer has a friction feed, which was patented in 1903, which makes it an interesting transitional model.

The Palmer-type micrometer cannot be visually confused with any other.