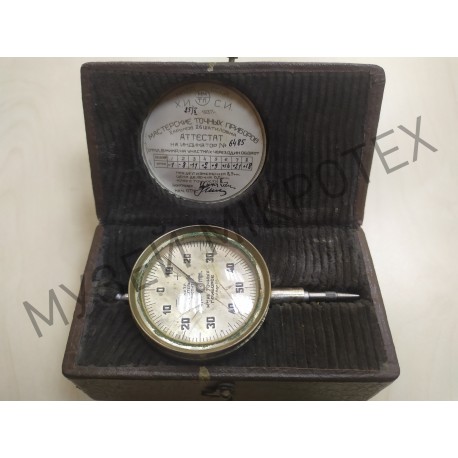 Ironically, or perhaps by someone's bad intentions, all 5 instrumental serial plants of the USSR for the production of meters were located exclusively in Russia (Leningrad-Kirov Krin, CHIZ, StiZ, Caliber, SIZ- until World War II and LIZ-after). All Soviet tool factories used foreign equipment and produced a rather limited range of compiled meters.

The other 14 "fraternal" republics, including Ukraine, did not have a single (!) Meter plant, which became a major problem after gaining independence in 1991:

Kirovsky Krin has been bankrupt since 2011, and has been in liquidation since 2017;

The latest Russian tool factory for the production of StIZ meters produces a limited range of low-quality plates, rulers, angles and analog calipers, and offers a rather mediocre Chinese meter under its TM;

Russian buyers of the meter, thanks to oil and gas and "military" money, have always had the opportunity to choose between a modern expensive branded meter (German, Japanese and Swiss) or their own, "Soviet model";

Ukrainian enterprises have always had limited resources, so the issue of importing a quality meter for our country was acute until 2004;

Kharkiv MICROTECH started its own development and production of the Ukrainian innovative meter in 2004;

MICROTECH for 2015… 2020 has developed and received about 80 patents for an innovative meter, which is exported to 46 countries (USA, Italy, Germany, France, Spain, Israel, Japan, Korea, Singapore, China, Czech Republic, Mexico, Poland, South Africa, Hungary and others).

It is a symbolic 80-year period between the Kharkiv clock indicator from the MICROTECH Tool Museum and the modern production in Kharkiv of over 500 standard sizes of the innovative and competitive MICROTECH meter.

A rare clock-type indicator, which was produced in the Workshops of Precision Instruments of the Kharkiv Engineering and Construction Institute (ICC HISI) in 1937, has the following features:

Availability of metrological "Certificate" with confirmation of accuracy class 2;

The error of the clock indicator according to the "Certificate" was -11 μm / +21 μm;

In terms of workmanship and solid construction, it is very similar to modern, the world's best analog indicators from Kroeplin (Germany);