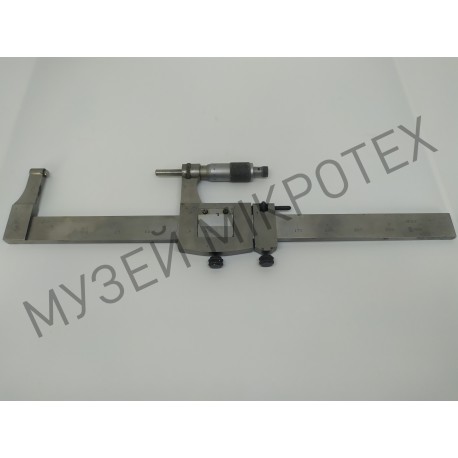 The history of the Voskov SIZ plant in the suburbs of St. Petersburg is quite long and lively:

The Armed Sister's Plant was founded by Peter I in 1721 to produce guns;

The plant was the main producer of weapons in the Russian Empire thanks to gunsmiths, Mosin (rifle), Degtyarev (PPD machine gun) and Fedorov (automatic rifle), but after the October Revolution, the weapons achievements of the PPE ended;

Since 2003, Voskov PPE has been bankrupt and has ceased production.

Let's go back to the sister calipers…

The first of the two SIZ calipers, the 81-year-old caliper caliper type SHTs-150 has a complex factory ,37600, indicating the year of manufacture "37" and the general serial number "600" and the following technical features:

Measurement range 0… 150 mm at a division price of 0.05 mm (case of the manufacturer on the sponge, the division price is erroneously marked as 0.1 mm);

There is no mechanism of exact supply according to modern standards of calipers;

The rare sister caliper has a brake trigger for locking the movable frame according to the American patent Pat.US1641266 from 1925 (similar to the early caliper "MAUSER" from our "Museum").

The second of the two SIZ calipers, a 79-year-old combined caliper, with an additional micrometric reading, has a factory №22 and the following technical differences:

A micrometer head of the MKG-25 type is installed on the movable sponge;

- The available mechanism of exact micrometric giving for movement of a mobile frame on a bar;

All combined calipers with a micrometer head use (rightly or wrongly) US patent Pat.US403726 from (.