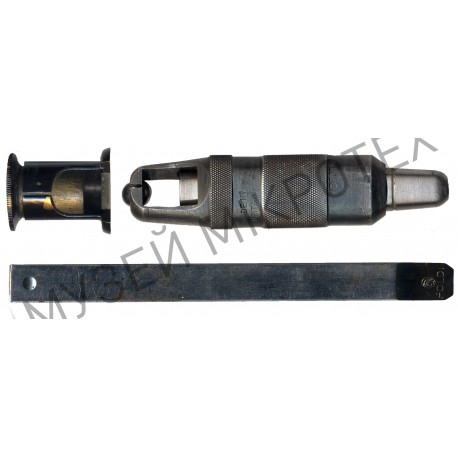 The MICROTECH Museum of Industrial Tools has a Poldi-Hütte hardness tester, which is very simple in design and interesting in capabilities.

The hardness of materials is a very important indicator, since it directly affects the durability of equipment and tools, and the life of the mechanisms.

There are several methods for dynamically controlling the stiffness of hard and ductile materials (Rockwell, Brinell, Vickers and others) using a fight-indenter in the form of a diamond pyramid or a carbide and steel ball.

After pressing the indenter into the controlled part, a hole remains, the dimensions of which are related to the hardness of the material of the part. Stationary hardness testers have considerable weight and dimensions, since they must provide a sufficiently large force pressing indenter (up to 3000N). A limitation to the use of traditional stationary hardness testers with an indenter indented into a part is the impossibility of measuring overall parts and limiting the surface roughness of the measured part.

The hardness tester according to the Poldi-Hütte principle from the "Museum of Industrial Tools" MIKROTECH is designed to measure the hardness of overall parts and parts from an untreated (rough) surface.

They began to use the impact hardness tester for the first time since 1900 in the Czech Republic at the Poldi-Hütte factory, by the name of which it is known in the world.

Features of the rare Poldi-Hütte hardness tester should include:

The hardness gage has the form of a metal “handle”, on one side of which a 10 mm diameter indenter ball is fixed, and on the other hand there is a fight that is hit with an ordinary hammer;

After obtaining, using a Poldi-Hütte hardness tester, a spherical imprint on the measured part and on the reference bar, the diameters of these prints are monitored using a microscope;

The diameters of the obtained wells are compared and the stiffness of the part is determined using the available calculation table.